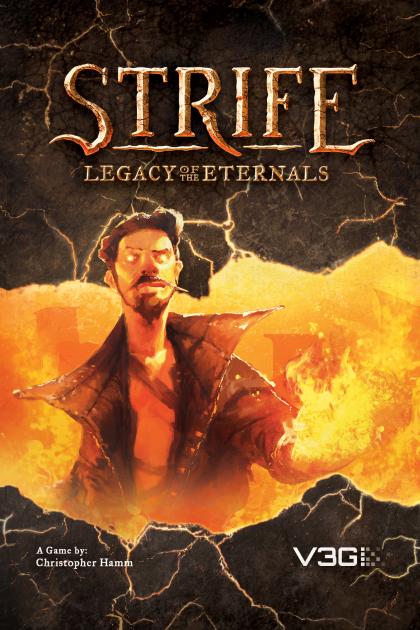 Strife: Legacy of the Eternals

Once more, conflict rages across the world of Aerim. You are one of the Eternals, a group of immortals forever waging war from the shadows. Call forth your champions to battle against those of your timeless foes. Harness the legacy of each champion's deeds as they echo across time to empower the next. For the Champions of Aerim, this cycle continues, as it always has and always will. For the Eternals, there is only...strife.

Strife, a two-player strategy card game that plays in around an hour, is a game where you always know your opponent's options. Aside from mastering the unique combo-creating gameplay of your champions, figuring out how to outmaneuver your opponent is where the true challenge lies.

Each player has the same hand of ten champions and will simultaneously play them as they fight over key locations throughout Aerim worth varying victory points. Each champion has a battle ability that's triggered during battles and a legacy ability that can be used only while on top of the legacy pile. This creates an intricate latticework of strategy for the players as each champion must be considered for not only what he can do in the current battle, but for which ability he will add to the next.