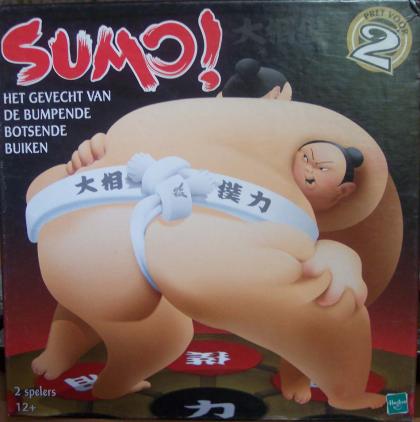 SUMO! It's a knockout. Will you overcome your feisty opponent to win the battle of the bulge? It's nail-biting stuff as you move around the ring - safe one minute and in danger the next. Who will hold out to the last? Try your hardest and you might be lucky, otherwise you'll be tipped over the edge. Sumo - it's tough work, but someone's got to do it!

(From Walt Mulder)
It's similar to the game "Sumo Arena" but this one's only for two players. Very nice components and colorful board. The two Sumo figurines that are enclosed add character to the game! Card play determines whether you make an offensive or defensive move with the ultimate goal of pushing your opponent out of the arena.