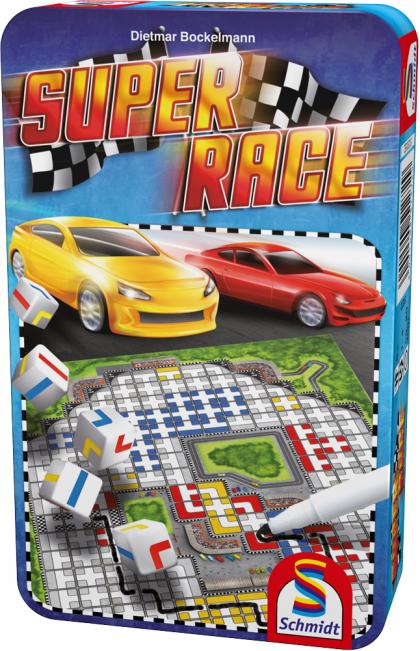 In Super Race, players try to be the first to complete a lap around the track, using the dice to hug corners and race as quickly as possible. Players first decide which racetrack to use on the double-sided player boards. Then they start racing!

On a turn, a player rolls the five dice, sets aside any she wants to keep, then rolls up to two more times, rerolling dice set aside, if desired. The dice depict curves or straights in three different colors, and after the player stops rolling, she chooses all the dice of one color and must use all of them to move on the track. Colored track on the player board can be moved through only with dice of the appropriate color, while any die color can be used to cross gray track; if a player can't use all movement for a color, she must choose a different color. A player cannot cross the same square twice. End your movement in a tight corner, and you take another turn immediately.

Players take turns until one reaches the finish line, which triggers the final round. After all players have taken the same number of turns, whoever has driven the farthest across the finish line wins. Variants in the rulebook include an option for oil slicks that take two dice to cross, a point system for a multi-race world championship, and a two lap race on the Indianapolis board that includes a shortcut. The challenge in this latter race is that you're still restricted from crossing the same square twice. Take special care the first time around, or else you'll be weaving like a maniac on lap two!