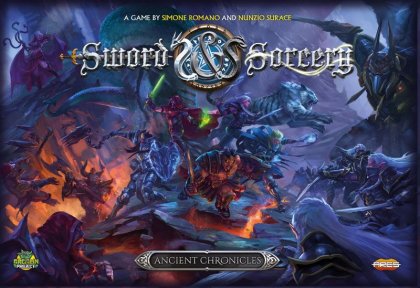 Sword &amp; Sorcery is an epic-fantasy cooperative board game in which 1-5 players fight together against the forces of evil, which are controlled by the game system itself.&#10;&#10;Each player controls one or more heroes &ndash; legendary characters brought back to life by powerful sorcery. Weakened by the resurrection, they grow stronger during their story-driven quests. By acquiring soul points during battles, the heroes' souls regenerate, restoring their legendary status with multiple powers, magic and soul weapons, and powerful artifacts.&#10;&#10;Ancient Chronicles, a new starting point for the game, is fully compatible with the original Immortal Souls campaign in terms of gameplay, allowing players to cross over heroes and monsters from one campaign to another. Gameplay remains familiar, but this new cycle also introduces new elements to the setting, expanding both the narrative engine and the mechanisms, without making the game more complex.&#10;&#10;The Ancient Chronicles campaign is set in the distant past of the events narrated in the Immortal Souls campaign.&#10;&#10;