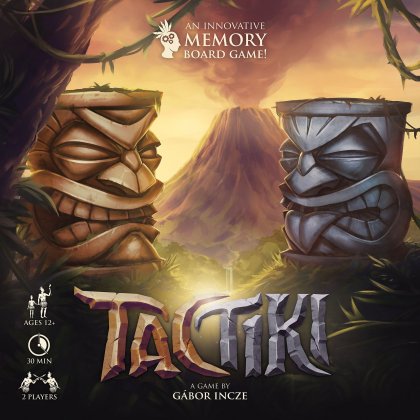 TACTIKI is an innovative board game with a strong memory aspect for two players, recommended for ages 10+ with an average game time of 30 minutes. Tactics and planning are the lifeblood of this game, which will fascinate and attract players from all over the world - all securely packed in a mysterious box!.&#10;&#10;OBJECT OF THE GAME&#10;Make your way to the opposite side of the board and build a TAC or TIKI statue with 5 of your pieces on one of your opponent&rsquo;s start fields. The first player to build a 5-high statue wins the game!&#10;&#10;GAME BOARD&#10;The square, 5x5 board tile is the island where the war of the gods will take place. The first row of fields on opposing sides represent the start fields, while the three rows in the middle make up the battlefield.&#10;&#10;SETUP&#10;Both players put each of their ten pieces on their own start fields, placing exactly two figurines on each field. You can position the pieces as you wish on the start fields in any combination of ranks, including two of the same rank on a single field.&#10;Based on your game strategy, there are thousands of different ways to set up and arrange the figurines.&#10;On the back of each piece there is a number (rank) ranging from 1 to 5. At the beginning of the game, the players should place their pieces so that the ranks are only visible to them, and not to their opponent.&#10;&#10;STRENGTH OF THE PIECES&#10;The number on the back of each piece represents its rank.&#10;The strength hierarchy ranges from 5 to 1 - with the unexpected twist that a rank of 1 is stronger than a rank of 5.&#10;&#10;GAMEPLAY&#10;During the game, you will move and stack multiple pieces on top of each other, forming columns and initiating attacks against your opponent. Because TIKI has started the war, the player controlling TIKI takes the first turn.&#10;On your turn, you may either move pieces or reincarnate a defeated piece.&#10;&#10;HOW DO YOU MOVE?&#10;You can move a piece 1 field forward, left, or right, but not backwards or diagonally:&#10;&#10;each player&rsquo;s turn consists of two moves:&#10;1.) One piece can move twice&#10;2.) Two pieces can each move once&#10;&#10;When a piece moves into a field with 1 or more already existing pieces, it is always placed directly on top of the other piece(s).&#10;Also, once a piece has reached an opponent&rsquo;s start field, it may not be moved anymore, neither by you nor by any action of your opponent.&#10;Note: If choosing to move on your turn, you must use both of your moves! If there is only 1 move possible, the second move is omitted.&#10;&#10;REINCARNATION&#10;Once defeated, a piece is not entirely out of the game. On your turn, you may choose to reincarnate a defeated piece by placing it on one of your empty start fields. &#10;However, reincarnation comes with a price - you may NOT move any pieces this turn if you reincarnate a defeated piece. If you have multiple defeated pieces, your choice of which one to reincarnate is secret and the rank of the piece is kept hidden as in the initial setup.&#10;Note: You may not reincarnate a defeated piece on top of another active piece - the start field must be empty.&#10;&#10;ATTACKING&#10;When you move one of your pieces directly on top of an opposing player&rsquo;s piece(s), an attack happens and is immediately resolved.&#10;To resolve the attack, rotate the top 2 pieces of the column 180 degrees to expose the hidden ranks. The piece with the weaker rank is defeated and removed from the board. The stronger piece is then rotated back to again hide the piece&rsquo;s rank.&#10;If you attack a field with multiple pieces stacked on each other, the entire column has been attacked and each attack is resolved one at a time. For example, if your rank 4 piece attacks a column made up of a rank 3, a 1, and a 5, it will be stronger than the 3 and the 1, thus rotating and removing them one by one from the column and the board. However, since it is weaker than the 5, the attacking number 4 will also have to leave the battlefield. Column attacks are always resolved from the top to the bottom.&#10;When two pieces of the same rank meet, both pieces will remain on the board, but the defending piece is now blocked and may not be moved again until the top piece moves or is defeated in a subsequent attack.&#10;&#10;HOW TO WIN&#10;You win the game by being the first player to build a statue of 5 pieces on an opponent&rsquo;s single start field.&#10;&#10;STRATEGY TIPS&#10;The game board of TacTiki may appear small and the rules may be easy to grasp, but there&rsquo;s an incredible amount of depth and new strategies to discover with every play.&#10;You can aim to play offensively or defensively at various stages in the game, use your memory of your opponent&rsquo;s piece ranks to devise tactics, or plan a counterattack, but you can also win the game by simply bluffing - it all depends on your strategy and memory!&#10;Here are a few strategy ideas to think about during your next game:&#10;&#10;THE INITIAL SETUP&#10;You&rsquo;re free to arrange your starting pieces however you wish, so finding good combinations and predicting how they will move are extremely important.&#10;&#10;OCCUPY YOUR OPPONENT&rsquo;S START FIELDS &#10;If you&rsquo;re able to occupy all of your opponent&rsquo;s start fields, they will no longer be able to reincarnate defeated pieces and bring them back into the game. They&rsquo;ll be effectively blocked and you&rsquo;ll be in an easier position to build your statue and claim victory!&#10;&#10;THE ROLE OF MEMORY&#10;Each player keeps the rank of each piece facing only to themselves until two opposing pieces clash on the same field. However, it&rsquo;s in your best interest to remember the revealed rank of the exposed pieces.&#10;From this moment on, the MEMORY part of the GAME kicks in! The more ranks you can keep in mind, the better strategy you can develop.&#10;&#10;&mdash;description from the designer&#10;&#10;