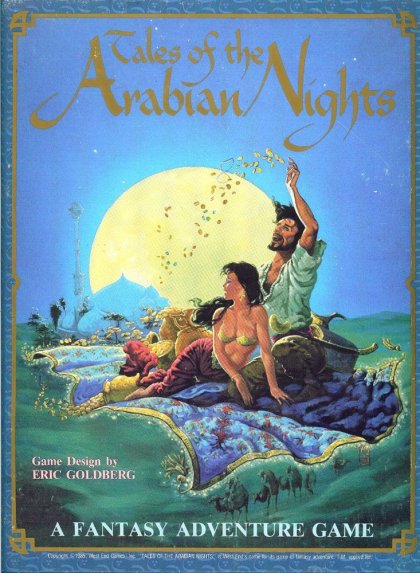 Tales of the Arabian Nights

This entry is for the West End Games version and other printings. For the 2009 Z-Man Games version, go to Tales of the Arabian Nights Tales of the Arabian Nights is actually several games in one. In the standard game, the players are characters living in the 1001 Nights universe, wandering about the map and having adventures. These adventures are designed in a sort of paragraph system, with the player to your left reading what happens to you and exposing the choices you have - choices that then lead to other paragraphs or outcomes. The characters evolve during their adventures, acquiring skills of various degrees of advancement to open up new options and various "statuses" (such as married, despondent, cursed, etc) which also affect play. The object is to become rich and come back to Baghdad. Other variants of the standard game include the Quest game, which forces you to roam the map looking for quests to fulfill. There's also a Merchant game, where your adventures give you arrow tokens which are used on a little separate board to simulate the progress of your caravans. The German edition, Geschichten aus 1001 Nacht, was published in 2000 and contained a revised Book of Tales along with some extra adventures. Re-implemented by: Tales of the Arabian Nights