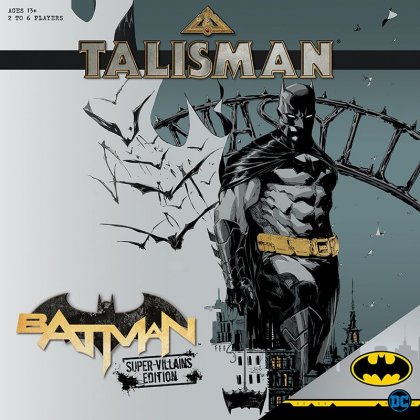 Talisman: Batman &ndash; Super-Villains Edition allows players to take on the role of Gotham City's notorious evil-doers, sneaking and fighting their way through Arkham Asylum's two floors and central tower to be the first to subdue Batman and successfully release its dangerous inmates.&#10;&#10;The anti-heroic objective in this take on the classic Talisman fantasy tabletop game focuses on building the health, strength, and cunning of the Caped Crusader's enemies. Players must compete with one another, while fending off heroes, including Batman himself who moves around the board as an NPC. The player who can overcome these challenges and shut down the Arkham Asylum security system will free all of the inmates earning the reputation needed to be King or Queen of the criminal underworld of Gotham City. The game features artwork from DC's &quot;New 52&quot; era, custom board art and includes thirteen plastic character figures, more than one hundred encounter cards, six-sided dice, and stat boards to monitor each character.&#10;&#10;