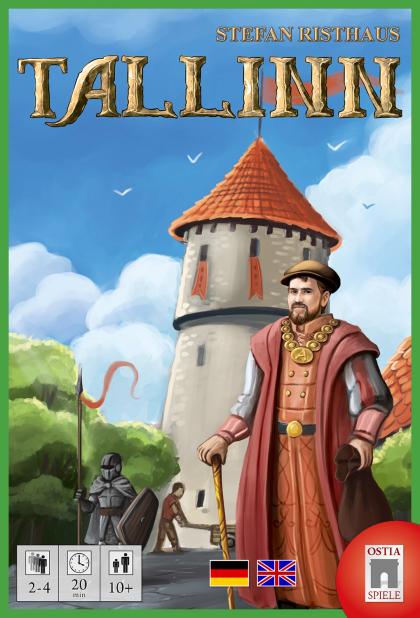 Descrizione tratta da Boardgamegeek:
Tallinn (Reval, Castrum Danorum) in late 14th century: You try to make the three most powerful forces in the city your allies, namely the Teutonic Knights, the church/monasteries, and the merchants. Each player starts Tallinn with an identical set of ten cards. These cards have two halves, each with icons representing the influence in one or two of the groups. Every round each player selects one card secretly, touching the side of the card they want to be valid, then all players reveal/place their card simultaneously. The players add their played card to their display, overlapping the cards, so that only the half that they touched when revealing the card is seen. The other half is taken out of play for this game. Some cards show icons that allow you to collect victory points immediately. When doing so, you compare your total of power of the specific group with each of the other players, scoring some points for each player you beat and less in case of a tie. In game end scoring, you compare all symbols with all of your competitors and gain additional points when having more symbols of a kind, and fewer points in case of a tie. Finally, you score more points for each face-to-face victory when comparing the symbols on cards you have taken out during the game as part of the city wall. Scoring during the game weakens your display because the scoring symbol is only on card halves with a single icon of influence, while other card halves show up to three icons. Tallinn is the second game in the cycle of little tiny card games of Medieval Theme in the Baltic Sea by OSTIA-Spiele, following VISBY.
Traduzioni titolo gioco:
Editori gioco:
OSTIA Spiele
Artisti gioco:
Christian Fiore
Versioni:
English/German edition
ID su Boardgamegeek:
194505