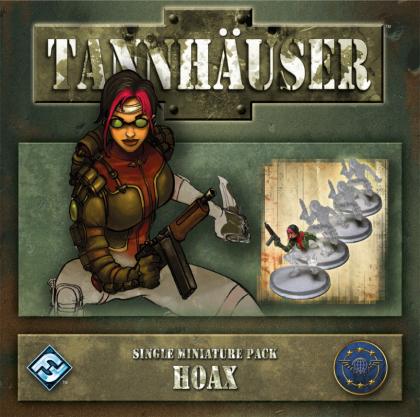 The moonlight poured in through the windows, casting shadows about the halls. The sentry thought he saw movement, the slightest of disturbances in the pale light that illuminated his watch. He paused, waiting for the ghost to show itself again. But as a sudden chill shot through his spine, he knew that the apparition was behind him. A hand covered his mouth and a translucent blade materialized across his neck.

“Quiet now,” Hoax said, with a hint of menace in her voice. “We wouldn’t want to raise the alarm, would we?”

Fantasy Flight Games is pleased to announce the upcoming release of Hoax, the latest single figure expansion for Tannhäuser! Armed with a stealth suit forged from mysterious alien technology, Caitlin “Hoax” Lamsbury is a ghost on the battlefield, fading from sight only to ambush her foes from the shadows. Her stealth suit, Joshua T1, allows her confuse her foes and infiltrate even the most secured locations.

Hoax comes complete with four miniatures - one is painted to reflect Hoax fading from sight while the other three are translucent, used to track her movement on the board while she is invisible. When using Hoax’s camouflaging suit, players can perplex their opponents by sending her translucent figures in opposite directions. Which one is the real Hoax?

In addition to the miniatures, Hoax also comes with a rulebook detailing the rules for invisibility, tokens for her equipment (as well as bonus tokens), and a custom scenario which throws players into a deadly game of hide-and-seek!

Tannhäuser is a squad based tactical board game set in an alternate timeline in which WWI has never ended. The forces of the Reich have turned to the occult, while the forces of the Union have delved into alien technology and developed deadly weapons of war. Using the revolutionary Path-Finding System, Tannhäuser is quick and easy to play.