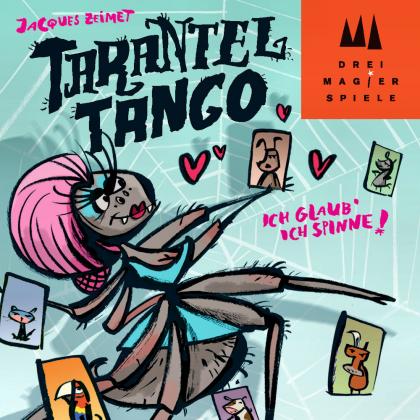 Another fast paced card-game by Jacques Zeimet in the vein of Kakerlakensalat und Kakerlakensuppe (also by 3 Magier Spiele).

Each player gets his share of cards and forms his own face- down stack. The goal of the game is to get rid of one's cards as fast as possible. To do so, cards are placed clockwise around a five-sided Tarantula tile in the middle of the table.

Before turning over the top card from his stack, a player might have to imitate the animal on the previous player's card (by saying "wuff", "eee-ah" etc.). This depends on some features of this previous card: If it shows one or two spiders the player has to "imitate" once or twice, else he has to remain silent.
Then he may put his top card down in the next slot clockwise around the Tarantula tile, except when there are two animals on the previous card. Then the new card goes in the next but one slot ... All in a time limit of 2 seconds max.
And finally, if the new card is a Tarantula, all players have to smack their hand down on the table (to "chase it off").

If anyone makes a mistake or is too slow, he has to take all cards on the table into his own stack and a new round begins.

Several additional expert rules make it even more complicated to get rid of the cards and provoke more mistakes, e.g. cards have to be placed on previous donkeys as these are to stubborn to move on or curious dogs change the direction of placing cards (clockwise to counter-clockwise and vice versa).