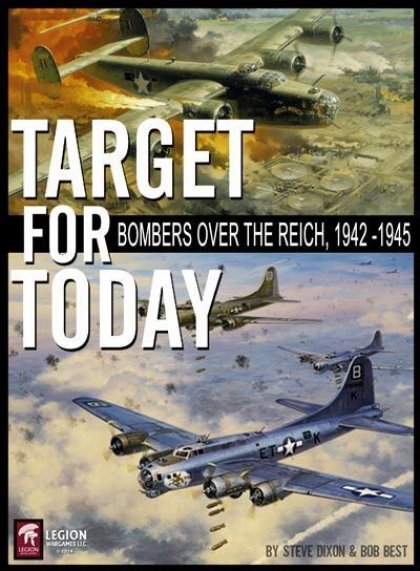 From the publishers website:&#10;&#10;TARGET FOR TODAY is a solitaire game that recreates American's Daylight Strategic Bombing Campaign against Nazi Occupied Europe during the Second World War. Considerable research, including review of many oral histories gathered from veterans who flew heavy bombers in the Daylight Strategic Bombing Campaign was done to make Target For Today! function as closely as possible to reality. The game was designed to provide YOU, the player, with the ultimate gaming experience depicting the same types of events and decision making processes experienced by our veterans who flew the real-life missions.&#10;&#10;Now, YOU are in command of an individual bomber on an individual mission over Hitler's Third Reich -flying either the B-17F or G Model Flying Fortress or the B24D, or J Model Liberator bomber. A series of individual missions are strung together in the campaign game to form the player's tour of duty. Just as it was in real life, the objective of the game for the player is to survive your tour of duty so you can rotate home.&#10;&#10;The US Army Air Forces suffered one of the highest casualty rates of any branch of the military services including the US Marine Corps during World War II. The heavy bomber groups of the 8th Air Force flew a combined total of 10,631 strike missions over Europe during the period of this game. The 8th Air Force lost 4145 bombers on these missions. Surviving your tour of duty could be difficult!&#10;&#10;TARGET FOR TODAY is an advanced update of Glen Frank's classic game B17, QUEEN OF THE SKIES. Some familiarity with that game is assumed, but &quot;TARGET FOR TODAY&quot; is a completely new game -you do not need to own B-17, QUEEN OF THE SKIES to play it. New tables are included and the rules are organized according to the sequence of play in any typical mission. TARGET FOR TODAY is designed so that each individual mission is fast and easy to play. The campaign game that comprises your tour of duty offers the player a game that is rich in detail, making the game as realistic as possible while still remaining playable.&#10;&#10;In the tradition of B-17 Queen of the Skies, and following in the foot steps of B-29 Superfortress, comes a new solitaire game from Steve Dixon. Bob Best and Shawn Rife Steve Dixon. Tentatively titled &quot;Bombs Away!&quot;, it has been renamed &quot;Target for Today!&quot;. Fly a single mission, a single campaign or fly the entire air campaign from 1942 to 1945 with the 8th or 15th Air Force, piloting either a B-17F, B17G, B24D, B24J and for those so inclined, the YB-40.&#10; The target list will be greatly expanded for the 8th and 15th Air Forces. Enemy planes we plan to provide are the Me-109, Fw-190, Ju-88, Me-110, Me-210, Me-410, He-162, Me-163, Me-262, and Ta-152.&#10;&#10;For more information visit the Consimworld Forum at http://talk.consimworld.com/WebX/.1dd58f17&#10;&#10;Battle Board 11&quot; x 17&quot; (mounted) &#10;Game Counters 176 each .6&quot; 56 each 1.2&quot;&#10;Cards (3&quot;x4&quot;) 5 Bomber Types&#10;Rules Book 44 pages&#10;Chart Book 32 pages&#10;Target Book 56 pages&#10;Flight Manual 24 pages&#10;Crew Boards 5 ea. 11&quot; x 17&quot;&#10;Player Aids 10 ea. 8.5&quot; x 11&quot;&#10;&#10;