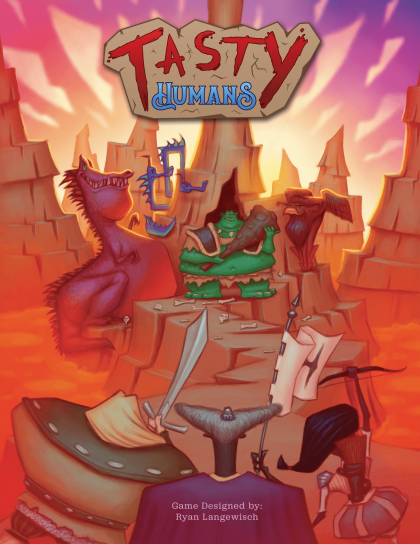 Tasty Humans is a 30-60 minute, tile-laying, pattern-building game for 1-4 players who take on the role of fantasy monsters trying to appease their insatiable appetites. As the monsters toss around the village king, they attract a steady buffet of adventurers who muster their feeble attempts at putting up a fight. Players take turns selecting which adventurers their monster will consume, dropping various body parts into their stomach. Each creature has their own personal craving that dictates how they prefer having their food settle, and throughout the game they will acquire tasty leaders that also increase satisfaction in different ways. Once a monster has completely filled their stomach, the player that most effectively maximized the overall satisfaction of their monster will be victorious!&#10;&#10;&mdash;description from the publisher!&#10;&#10;