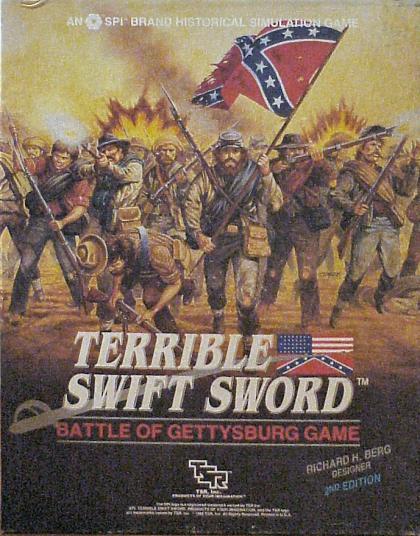 Three full days of Gettysburg at a small-unit level including counters for individual leaders and horses. Many short scenarios are available but its appeal is the 125-turn 60+-hour full game. Inspiration for the Great Battles of the American Civil War series of games.

The name Terrible Swift Sword is taken from the Civil War era song "Battle Hymn of the Republic," which has in its opening lines "He hath loosed the fateful lightning of his terrible swift sword."

(from first edition,soap box side of box:)

TERRIBLE SWIFT SWORD: The Three Days of Gettysburg is a grand tactical simulation of one of the most decisive battles of all time: Gettyburg.

Three days of cataclysmic combat saw 50,000 Americans lost.
The game utilizes colourful cardboard playing pieces that accurately represent the size and strength of all the Union and Confederate units actually involved in the battle.

The beautifully illustrated map effectively portrays the unusual waves of ridges and scattered forests that criss-cross the battlefield.

The units move,position,and engage for battle across the map through a super imposed hexangonal grid,which functions like a chessboard's squares.