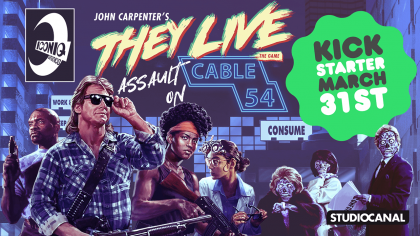 They Live: Assault on Cable 54

They Live: Assault on Cable 54 is a narrative driven, adventure game that features hidden enemies inspired by the 1988 sci-fi classic.&#10;&#10;The main game features a cooperative campaign designed for 4-6 players taking the roles of Human or Invader (secondly a 1-2 Player Blind Play mode is currently in development). &#10;Most importantly, it includes a real-world working pair of Hoffman Lenses that not only make you feel more immersed in the world of the movie, but are also an integral part of the game.&#10;&#10;The adventure involves players exploring the city of LA to gain assets that will prepare them for the final push against the oppression of the Invaders.&#10; Players will assume the role of either a Human or an Invader, and that will determine if they plan to strengthen the resistance or sabotage their efforts to succeed. However, this role will be hidden from the other players, and can only be detected by using the Hoffman Lenses.&#10;&#10;Great effort has been taken to ensure that this feels like a living, breathing story within the world of the classic movie.&#10;&#10;&#10; Can a simple drifter rise to lead the resistance against our Invaders?&#10; Can a corrupt politician find redemption?&#10; Can a tired detective track down an elusive Invader-targeting serial killer? &#10;&#10;&#10;These stories are told through a unique story deck for each character. The order of their deck is randomised, and how many cards it takes to complete your story depends on your success with each. This system means a different personal-story experience each time you play. &#10;Each story features different endings depending on if you&rsquo;re playing as a Human or an Invader. Completing them is optional, but doing so will reward you with unique character items and special skills to aid in overthrowing the Invaders, or sabotaging the resistance.&#10;&#10;The game contains a ticking timer that progresses towards a fixed deadline. In order to win the game, you need to get to Cable 54 and start the &lsquo;final assault&rsquo; before the clock hits midnight!&#10;&#10;The &lsquo;final assault&rsquo; contains three story-based trials that your team will need to overcome to win. Doing so will require high-level characters that players have developed throughout the game. You will also need a vast stash of weapons, items and allies to be victorious.&#10; Each of the three trials will test your skills, and require you to spend assets on improving your chances of successful dice rolls. It&rsquo;s during this assault that enemy players are most likely to reveal themselves, and spend their sabotaged goods on halting your progress.&#10;&#10;With the correct planning, the right equipment, and a little luck, you have the chance to stop the signal once and for all, and live on in legend as part of resistance history. &#10;If you fail, well, things will be a lot worse&hellip;&#10;&#10;&mdash;description from the publisher&#10;&#10;