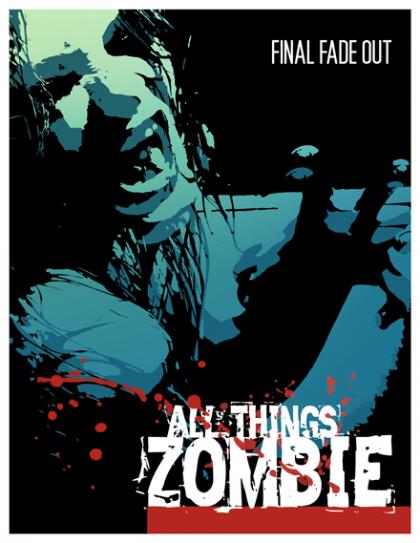 All Things Zombie: Final Fade Out

All Things Zombie: Final Fade Out is a miniature skirmish game set in a post-apocalyptic future where the world is filled with hordes of Zombies, leaving humans to fight for survival each day. The rulesystem is designed for 28mm miniatures but can also be used with 15mm models. Two Hour Wargames's popular Reaction System allows for cross-game compatibility and recreates a sense of chaos and uncertainty in the bleak future; player will never know how each encounter will end as characters act like real humans would in a tense situation, as opposed to how you would like them to act! Each model has only a few stats to keep track of. A typical scenario might see a small band of Stars (the player's models) and Grunts (their fellow survivors) search a town for supplies like food, gas, or ammunition; What they encounter on the streets and in each building is determined randomly and ranges from friendly survivors willling to trade or join the team to hostile Gangers or a horde of hungry Zombies. Where ATZ:FFO really shines though, is the comprehensive campaign system, allowing for character development similar to a role-playing game. The game can be played solo, cooperatively, or against each other.

From the publisher's product page:

“BETTER TO BURN OUT THAN TO FADE AWAY.”

Mankind has had a good run. Mankind has burned brightly over the centuries meeting every challenge head on and conquering each one. Even the self-inflicted challenges, conquered them all…until now.

ZOMBIES. YOU KNOW WHAT WE’RE TALKING ABOUT.

Everyone knew about Zombies. The fun new boogie man you couldn’t get away from. They were everywhere. On the Web, on your television screen, everywhere you looked. Yep, nothing but fun and brains for all! Right up until they became real.

HOW’D IT HAPPEN? WHAT STARTED THE OUTBREAK?

Who knows and who cares? When you meet your first Zombie or see your first Zombie Feast all those questions disappear. All you care about is staying alive. And that’s what All Things Zombie – Final Fade Out is all about, staying alive. All Things Zombie - Final Fade Out picks you up and sticks you right in the middle of a catastrophic zombie outbreak. Where you are, is just as important as who you are, when the outbreak occurs. Because unlike other zombie games, where the zombies have been around for a while, you won’t be able to tell the survivors from the zombies until maybe it’s too late. Hell, they could even be a relative! Because it’s all happening to you just like it would on Z Day - 1. Confusion, chaos, and lack of information are just some of the challenges you’ll face when the world starts to crumble. Will you have what it takes to survive the first 30 days? After that it’s all up to you. Maybe you want to rebuild the world, as you knew it; except maybe this time with you in charge.

All Things Zombie - Final Fade Out!