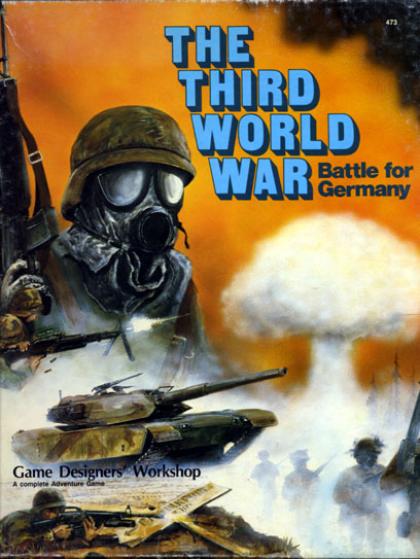 The Third World War: Battle for Germany:
Third World War (subtitled Battle for Germany) is a game of the struggle for central Europe by the forces of NATO and the Warsaw Pact. The divisions and independent regiments and brigades of fifteen nations battle in multi-impulse turns that feature NATO reserve movement and Pact echeloning. Air units represent groups of 100 aircraft of a specific type, each rated for air superiority, close support and strike capability.

The maps, scaled at 45 kilometers per hex, cover all of Germany and the surrounding area from Denmark to Yugoslavia and Italy, from France to Poland. Other games in this Third World War series, featuring constant scale and mateable maps, include Scandinavia (Arctic Front), the Balkans (Southern Front), and the Persian Gulf (Persian Gulf: Battle for the Middle East).