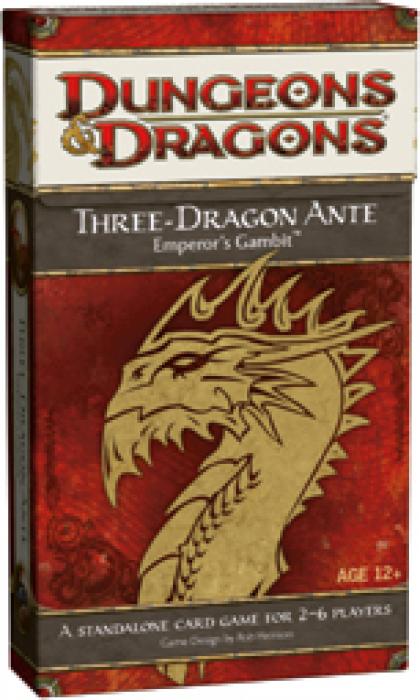 Theme
The theme of this game is similar to the original Three Dragon Ante. You are sitting in a bar in a fantasy world, playing cards for gold. The setting is a typical Dungeons & Dragons style bar and the game may be played as a sub-plot of a D&D game if desired.

Goal
The goal is to have the most gold at the point where the first player runs out of gold. In a two player game, you just have to bankrupt your opponent, but in a larger game, you may have to prop up another player until you become the richest.

Gameplay
A game is played over a series of hands until the end-condition is reached (above). A hand typically consists of playing one of your cards into the centre as an 'Ante' card, then three rounds of card-playing, attempting to play the best set (or 'Flight') of cards. The highest value Ante card determines the amount of gold that every player must contribute to the pot this round. The player who played the highest value Ante card starts the first round. Subsequent rounds are started by the player who played the highest value card in the previous round. Each card has both a numerical value and a power (or ability). However, the power is only triggered if the card has a lower or equal value to the card just played.

The game is a balance between playing high cards to win the pot of gold in the Ante and playing lower cards to trigger their abilities and improve your hand for a later round.

This game can be played by itself, or in combination with the original Three-Dragon Ante card set.

In addition to the added cards and rules, this game also contains complete rules for the original Three-Dragon Ante card game.