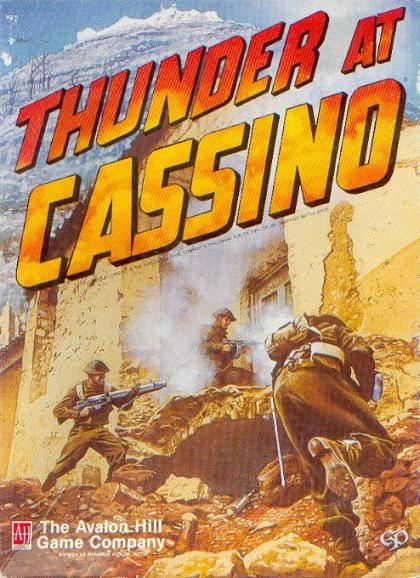 Thunder at Cassino is a mid-complexity wargame on the Third Battle of Monte Cassino during the Second World War. The game uses the area-impulse system first used in Storm over Arnhem, and to be used subsequently in Turning Point: Stalingrad and Breakout: Normandy.

The game depicts the battle from 15 Mar 1944 to 23 Mar 1944. The Allied attackers consisted of elements of the 2nd New Zealand Corps, comprising the New Zealand 2nd Division, the Indian 4th Division and the British 78th Division. The German defenders are mainly from the elite 1st Fallschirmjäger Division. The game map depicts the town of Cassino, its renowned monastery and the surrounding environs, divided into areas to facilitate movement and combat. Units are mainly infantry platoons, armor platoons depicted.

The game comes with two introductory scenarios, a end-of-battle scenario and a campaign game featuring the entire battle. Playing time varies from 60 minutes to 360 minutes depending on scenario chosen.