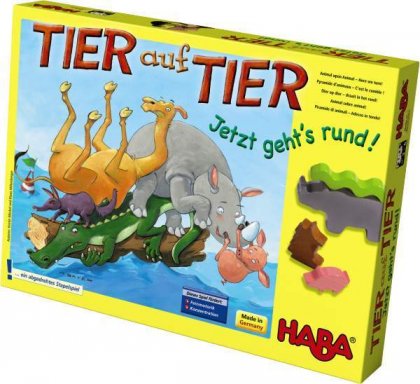 It's time to stack more animals, but as the title suggests, now you move around, too!&#10;&#10;In Tier auf Tier: Jetzt geht's rund!, a crocodile is trying to drift peacefully across the ocean, but unfortunately for it, you and the other players each control a bunch of animals that want to go for an ocean cruise, so you'll take turns stacking animals on the crocodile's back. The ocean waves don't let the crocodile drift peacefully, however, and after each animal is placed, the player must rotate the crocodile on its turntable &ndash; taking care to watch out for the shark at the same time.&#10;&#10;Whoever first stacks all of her animals on the crocodile's back wins!&#10;&#10;