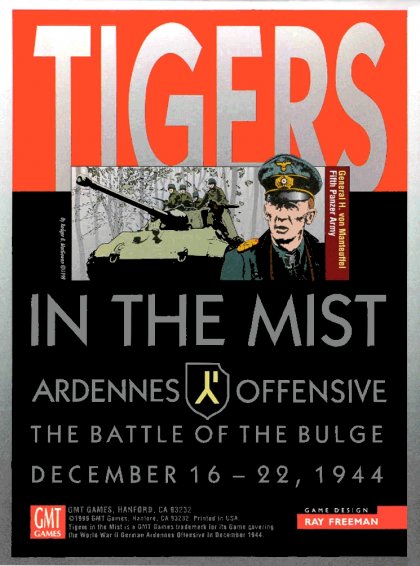 Tigers in the Mist

Tigers in the Mist, Ardennes Offensive, The Battle of the Bulge, December 16 - 22, 1944, this game simulates the early stages of the German offensive in the Ardennes section of Western Europe (Germany, France, Belgium, and Luxembourg) in December of 1944. Historically, the Germans planned to break through the thin American defenses in this area, cross the Meuse River, and seize the port of Antwerp in Holland. The German high command hoped that success would force a political settlement on the Western Front, thus allowing Germany to direct its full attention to defeating the Russians. In order to win the game, the German player will almost certainly have to get some units across the Meuse River

The Ardennes, a thickly wooded area on the borders of Germany, Belgium, and Luxembourg, where battle weary U.S. divisions were sent to rest and replace losses, or units freshly arrived from the United States were given their first taste of front line duty. At 5:30am, December 16, 1944, this 85-mile-long sector erupted into what would be the largest, most costly campaign on the Western Front in WWII. The Battle of the Bulge had begun.

During the first week of the battle, three German armies attacked vigorously and relentlessly in an attempt to reach the Meuse River, the major geographical obstacle between them and the great port of Antwerp on the northern coast of Belgium. Stubborn resistance by outnumbered American forces in the difficult terrain of the Ardennes canceled out much of the initial material advantages and surprise the Germans enjoyed. On December 22, Patton's Third Army began attacking the German southern flank north of Arlon, and on the 23rd, the weather finally cleared, allowing Allied air supremacy to be re-asserted over the battlefield.

As the German player, can you break through the American player's front lines and get sufficient forces across the Meuse River before the Allies can bring enough reinforcements to the threatened sector to stop the Ardennes Offensive? Play Tigers in the Mist and discover what might have been.

From the GMT website:
An impulse based movement and combat system which forces both sides to hoard reserves to respond to both opportunity and disaster on the battlefield.

Four scenarios playable in one-to-five hours, including an introductory scenario, two tournament scenarios of three hour duration, and a campaign scenario which covers the first week of the battle.

Rules, charts, and examples are organized for ease of use. The game system is logical and clean, making it very easy to quickly learn the mechanics of play.

An unpredictable combat system which results in heavy attrition for both sides and reflects the erosion of combat power that sustained battle has on units engaged in heavy fighting day after day.

Areas are irregularly-shaped spaces on the map. Each area represents a city, town, or crossroads. Each area is named and identified by a unique number. The area numbering system may be used to facilitate PBM or PBEM play as well as to aid in locating a particular area. The system is set up such that a numbered area is always adjacent to consecutive areas in the numbering sequence, ie. 75 is adjacent to 74 and 76. Areas are connected by roads. Brown lines are minor roads. Gray lines are major roads. Units move from area to area along roads. Units may not move to an adjacent area unless it is connected to the area moved from by a road.

Republished in Command Magazine Japan #62 in 2005.