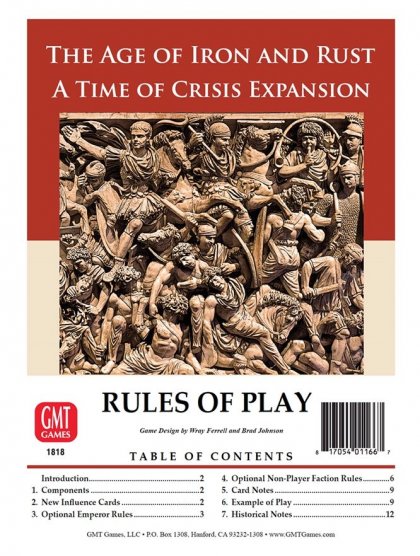 Time of Crisis is the game that allows 2-4 players to re-create the Roman Crisis of the Third Century, leading separate dynasties in a struggle for control of an empire beset by threats both internal and external. The Age of Iron and Rust provides new choices for players to build their influence, exert their Imperial power, and even play alone! New Influence Cards -- Deckbuilding is a key aspect of Time of Crisis, and the means by which players grow their influence among the Senate, the Legions, and the People of Rome throughout the game. While the base game provides an array of cards for players to choose from, The Age of Iron and Rust DOUBLES the number of choices with a full new set of cards that are available for purchase alongside the existing cards. Explore new strategies and card combinations to seek new ways of building your dynasty's Legacy. New Emperor Rules - During the Third Century, Emperors didn't only sit on the throne in Rome - they ruled from the provinces and commanded armies in the field, where they were at risk of being killed in battle or assassinated. These optional rules place Emperors directly on the board in place of a Governor or General token. Bold use of your Emperor will grant you bonuses, but if the Emperor token should be removed from the board, your reign is at an end. AI Players - New optional rules for non-player factions driven by easy-to-use "artificial intelligence" instructions will allow 2 or 3 players and even solo players to enjoy a full 4-faction game. Three different AI Player profiles can fill your empty seats to provide a mix of challenges working against the human players' Imperial aspirations.

Recensioni su Time of Crisis: The Age of Iron and Rust Indice ↑

Eventi riguardanti Time of Crisis: The Age of Iron and Rust Indice ↑

Video riguardanti Time of Crisis: The Age of Iron and Rust Indice ↑