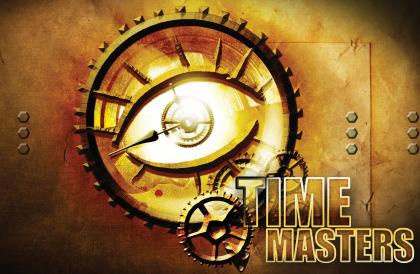 Time Masters is a fast paced deck building card game for 2 to 4 players that takes 30-45 minutes.

Only powerful mages who have dedicated their existence to the knowledge of time and the ways of bending it to their will may enter the Time Master’s tournament. To do this, they must master “Kè’s” – small portions of day-time necessary for their concentration.

Each player will embody one of these mages. They will need to carefully select and cast their spells in order to accumulate as much knowledge as possible before the end of the tournament to be declared the most powerful mage. Who knows, maybe even before it has even started !

Very similar to handling “Mana” in other games, you start with 4 active Kè that you will replenish by playing special concentration cards. With special cards called Timers you will prepare powerful combinations by keeping a card aside to be used on your next round to beat your opponents.

Deck building style offering a large freedom to the player to build his combos
Victory points are on the playing cards and are not bought separately (like in Dominion)
Cards which are “bought” during a player’s turn go straight to their hand and not their discard pile; these cards can be played directly on the next turn.
More than 30% of spell cards drive interactions between players
Resource management; your mana (Ke’s) is handled on the table independently from your spells thus not polluting your hand.