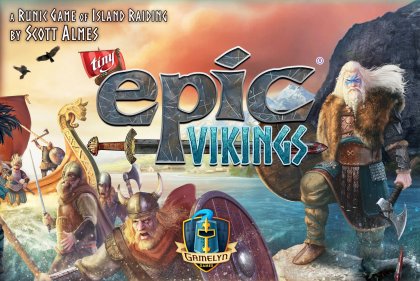 In the frigid Runic Isles of the North Sea, the Vikings reign supreme. These determined explorers navigate the icy fjords, build fertile settlements upon rocky crags, and fight for the glory of their clans with blood and steel. Only the Gods stand above them, and it is every Vikings&rsquo; dream to serve their God in the afterlife, Valhalla.&#10;&#10;Tiny Epic Vikings is a fast playing 1-4 player strategy game of drafting, area control, and set collection.&#10;&#10;In Tiny Epic Vikings, players lead a clan of Vikings over 3 eras, in hopes of claiming the icy lands for their own. They play Viking Cards that represent their clan&rsquo;s leaders, choosing the best builders, harvesters, explorers, and warriors. Raid and conquer the islands with settlers, build boats and temples to gain influence, and battle for the favor of the gods!&#10;&#10;&mdash;description from the publisher&#10;&#10;