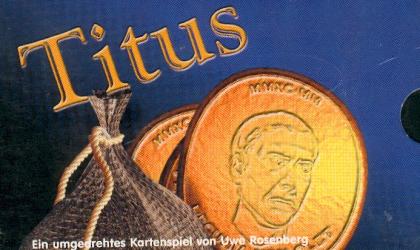 Theme
The cards show coins, possibly Roman, but this is a very abstract card game with a memory element.

Goal
Players try to collect as many victory points as possible by collecting series of four consecutively numbered cards.

Game play
The 54 coin cards have values from 1 to 19 printed on both sides. The value on one side differs from that of the other side by a maximum of two.
The goal of the game is to collect series of four coins with consecutive values (e.g. 1-2-3-4 or 9-10-11-12). Series of four are exchanged for victory point cards. There are 12 victory point cards with values from 18 to 7. The first player to collect a series gets the 18-point victory card, the next series is worth 17 points and so on, so the sooner you complete series, the better.

On his/her turn, a player has the following choices:

If a player manages to incorporate a card into his/her card display, they get another turn (limit: 3 consecutive turns). There is no limit on how many rows a player can start in his/her display.

The game ends when there are no cards left in the draw deck.
The player with the most victory points wins the game.