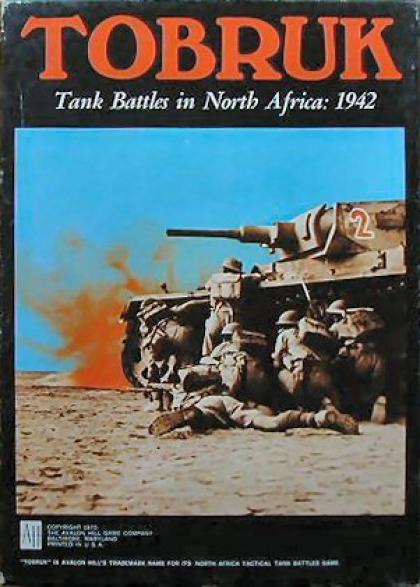 Tobruk is a tank combat simulation set in North Africa, specifically May-June of 1942.

[From the box back, including some odd formatting]
"The sun blazed down with white-hot intensity, turning the horizon into a shimmering, dancing ribbon. In the distance, the mechanical roar of German panzers could be heard like a thunderstorm about to break. The Afrika Korps was on the move!

Exhausted British Infantry, part of the famed Desert Rats, crouched low in their slit trenches, patiently waiting. Weary, dirty, and sleepless, they braced themselves to repel yet another of Rommel's ferocious assaults. Could this ragged, think line of Australians, South African, Free French, and British infantry continue to hold against the Desert Fox's veteran troops?

Now, you can re-create all of the furious action of tank-to-tank battles on the Western Desert during World War Two.

NINETEEN DIFFERENT GAME SITUATIONS are provided to enable you to re-create all facets of the decisive Gazala battle-Rommel's most spectacular victory that lead directly to his most spectacular defeat at El Alamein only a few months later. Now you can re-fight all the crucial actions of this important battle on a SQUAD and INDIVIDUAL WEAPON level: 'The Group Cruwell Feint', 'Action at Point 171', 'The Destruction of the 150th Brigade', 'Bir Hacheim: The Fall of Point 186', 'Convoy Raid', 'Night Assault', Battery Overrun' and more.

BEGIN PLAY ALMOST IMMEDIATELY! Now, through the innovative use of the Programmed Instruction method, even a novice wargamer can quickly get into the action. Each game situation has its own rules 'module'. To play the game it is only necessary to read the first short module. As skills increase, players advance to the more realistic modules at their own pace..."
[End box back]