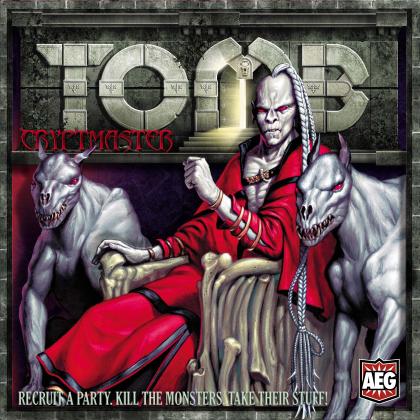 Once again, it is time to assemble a party and delve into the dangers of the Tomb! Tomb: Cryptmaster is a stand-alone expansion to the 2008 game Tomb, a dungeon adventure game in which each player recruits a unique party and races to clear more of the dungeon than any other player. Tomb: Cryptmaster introduces two new boards, 80 new characters, 400 new cards, more spells, items, prayers, and tactics, and a new deck: the Cryptmaster deck, which contains cards you can use to terrorize your opponents when they foolishly enter a crypt with surprises you have prepared.

The game is playable on its own, or it can be used in conjunction with the original Tomb game. Featuring a revised and expanded rulebook, players may try new variations such as Overlords and Player vs. Player action. Other new features include Henchmen you can hire out to other parties for a share of their loot and hideous Curses you can use to torment other parties foolish enough to get in your way. As with the original game, Tomb: Cryptmaster includes a basic board, this one specially designed for normal or player vs. player action, and an advanced board designed to test the hardiest adventurer!

Recruit a party. Kill the monsters. Take their stuff.