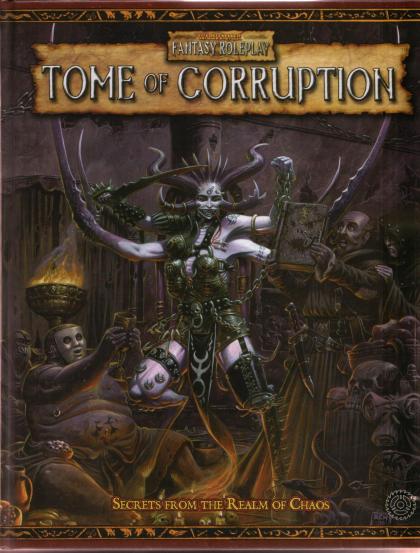 A sourcebook covering the Powers of Chaos in WFRP.

From the back cover:
"This expansive volume reveals all the secrets of Chaos, exploring it in lavish detail. From the countless varieties of Mutants and Chaos Spawn, to the Beastmen that haunt the unclaimed depths of the Forest of Shadows and the Drakwald, to the horrific Daemons spawned from nightmare, this sourcebook contains everything you ever wanted to know about Chaos in all its disturbing forms.

Inside this blasphemous tome, you'll find:

- Over 150 new mutations to create unique and awful Mutants, customizable based on the Dark God they serve.

- Detailed information on Cults in the Old World such as the perverse Sybarites and the Foetid Maw.

- Guidelines for building new cults, as well as details for creating cult leaders like the Cult Acolyte and Cult Magus.

- An assortment of Chaos Objects such as The Grim Feast and the Catalogue of Flesh.

- A slew of new Chaos-touch monsters such as the Amphisbaena, Basilisk, and Jabberwock.

- A gazetteer on Norsca, with guidelines for creating Norscan characters and running Norscan campaigns.

- Details on the savage peoples of Chaos, including the Kurgan and the Chaos Dwarfs.

- Extensive rules for playing servants of Chaos with new careers, rewards, and gifts of the Chaos Powers.

- Over 100 new Chaos Weapons and bizarre magic items to better fight for the favour of the Dark Gods.

- Expanded Lores of Chaos for those Black Magisters who follow Nurgle, Slaanesh, and Tzeentch, including new spells including Acquiescence and Flesh Puppet.

- Expanded Side-Effects tables for those who dabble in Dark Magic.

- Full statistics for all the iconic Daemons of Chaos, including everything from the pathetic Nurgling to the dreaded Keepers of Secrets.

- Extensive information on the Chaos Wastes as well as the strange places one might find there.

- And much more lore to drive the hardiest heroes mad with fear.

The Tome of Corruption is packed with information about Chaos and its servants. An indispensable guide for Game Masters, it also expands WFRP to allow for Characters who serve Chaos, offering new Careers, Spells, Rituals, Items, and all the madness-inspiring details that will leave your games forever changed."