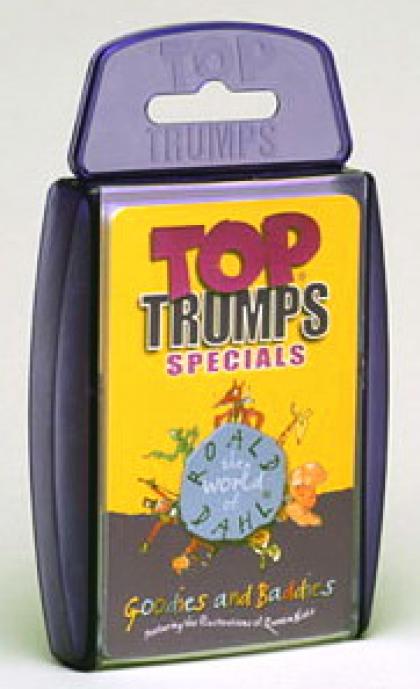 Top Trumps has been a very popular card game in the United Kingdom since the seventies. There are many different card decks with various subject matter, i.e. Cars, Planes, Films, Military Jets, famous TV shows, etc...

Top Trumps are now also available in the USA, based on the classic card game "War", it's played by choosing your best stat, trumping (beating) your opponent’s card, and winning the entire deck.

Each pack of Top Trumps consists of a number of cards (usually 30 or 32), each of which features in-game characters based on related subject matter which are full of stats, pictures and educational and interesting facts. The game is multiplayer and fits handily in the pocket so it can be played anywhere.

2-6 people can play. Deal out all the cards face down to the players. Each player holds their cards face up but may ONLY look at their top card.

The player to go first chooses the ‘best’ statistic (usually the highest) from their top card, e.g. “Top Speed 252mph”. All other players read out the SAME statistic. Whoever has the best or highest value wins and places all the top cards including their own to the bottom of their pile. They then choose the statistic for the next round.

The first player to win all the cards is the winner of the game!

The more familiar you are with the deck the better since you will gain from knowing what particular cards have a superior statistic compared to other cards. This adds a memory factor to the game. The cards have pictures of the subject matter and are packed with statistics and facts, and can also help improve on reading, math, and social skills.

This game is sometimes paired in the same deck with The Game of Authors a.k.a. quartets.