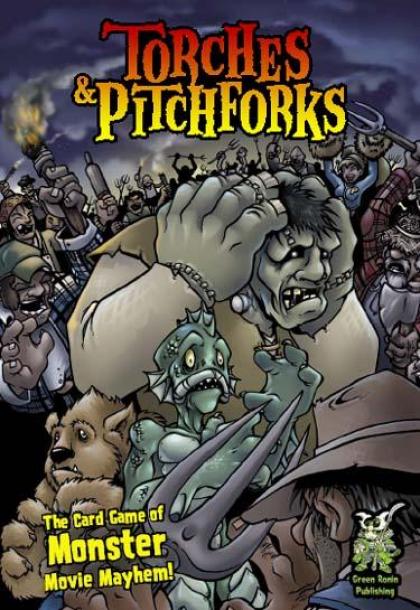 Torches & Pitchforks is the exciting card game of monster movie mayhem! Your townsfolk have suffered attacks for years but they're not going to take it anymore.

Those creepy monsters have haunted the Moors long enough and now it's time for you and your Mob to do something about it! Arm your townsfolk, fight off the monsters, and don't let those other mobs steal any of your glory. Torches & Pitchforks is the card game that's easy to learn and fun to play. Fight the monster menace today!

A cute "Defend your town" game where you fight monsters and attempt to score 30 points (points are awarded based on the defeated monster's power). Nice time-filler as games a relatively quick. It has a feel similar to "Munchkin", "Groo" and others, but is definitely in a class by itself. Yet another evolution of the "Take That!" card game, but that's not a bad thing.