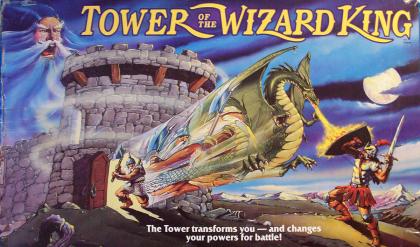 Tower of the Wizard King

The Wizard King is old and frail. After eons on the throne, he has made a final journey to survey his realm. Now he returns for the last time to his Tower, wherin lies the magic that makes one Wizard supreme over all others. For captured within is the magical Power of Transformation that allows a creature to enter the Tower as one self-- and emerge as another! An Elf of the Forests may be transformed into an Ogre of the Mountains. A Warrior from the Plains may become a Skeleton of the Swamps. Each of these creatures has his own special powers, special strengths-- and special fears.

The Wizard King sets his foot at the base of the Ramp of Time and prepares to begin his final ascent up the 15 steps to the Tower. He has but one thought: Which of his four apprentice Wizards--Terra, Zephyron, Solanos, or Oceanus-- will use the Tower's magic most strategically and prove himself on the field of battle? For the Wizard who demonstrates the strongest powers and wins the most pennants will succeed him. The moment the Ancient One steps onto the Tower, the apprentice will become the next Wizard King.

Word of the Great One's decline has spread throughout the realm. In minor skirmishes, the four young Wizards have already begun to test their strengths.

Now YOU can take the part of one of the four and join their battle. Throughout the adventure, you will remain just one of the four apprentice Wizards, but you will periodically transform yourself into any of the eight different creatures. And in the end, which of you Wizards will prove youself strongest, conquer the most enemies, capture the most castles and pennants-- and ascend the throne in the Tower? Which of you will become the new Wizard King?