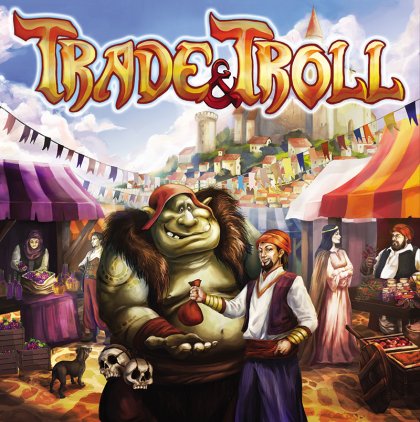 Description from the publisher:&#10;&#10;Long ago, in a remote village at the edge of the kingdom, lived a Troll. This Troll roamed the streets demanding a toll from any traveller he met; if they refused to pay, he would steal their trousers. One day the Troll stopped a merchant travelling along the road. As usual, he demanded the merchant pay the toll in order to pass undisturbed. The merchant, who was very cunning, made the Troll a proposal&hellip;&#10;&#10;Trade &amp; Troll is an easy to play game as the rules and the main mechanism can be learned in about 20 minutes. The real challenge lies in how to best suit each player&rsquo;s strategy to the developing situation on the board.&#10;&#10;Players represent a merchant whose goal is to arrange an efficient production line from the collection of basic resources to their manufacturing and consequent trading in market stands. Each turn players can build resource/stall/market tiles, cobble a road or collect money from tiles they already possess.&#10;&#10;At the end of the game, when the board representing the developing village is completely constructed, the player who owns the most developed market web, combined with the victory points collected differently during the game, wins.&#10;&#10;Unfortunately, things become more complicated as a troll arrives in the village! The control of this character swaps each turn after a fierce auction between players, and the one who finally gets it has the opportunity to block the opponents&rsquo; trades until the end of the turn.&#10;&#10;Trade &amp; Troll is a European-style game for 2 to 6 players created by Good &amp; Evil Games. It features a double-sided board map of T&amp;T kingdom, 120 high-quality illustrated tiles, 73 wooden meeples, and numerous illustrated tokens.&#10;&#10;