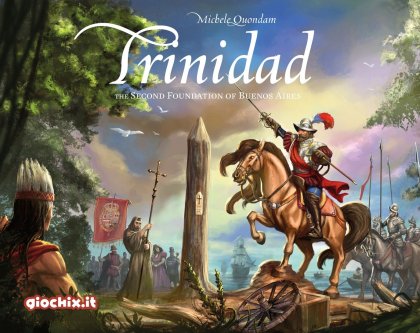 In 1536 Pedro de Mendoza founded the city of Nuestra Senora Santa Maria del Buen Ayre along the river Rio de la Plata. After a brief period of collaboration, the relationship with the Natives was ruined down forby the Conquistadores' arrogance. A war started, and an alliance between different Natives groups factions successfully drove the invaders from their land and destroyed the city.&#10;&#10;Almost fifty years later, Juan de Garay led a new expedition and founded a new city in the same area with the name of Ciudad de Trinidad. This city flourished to become modern Buenos Aires. Just like the first attempt, resources are low and the Natives, aware of the danger represented by the Spaniards, are ready to combat the intruders. To add to this tension, the English Crown has paid various Corsairs to threaten the new Spanish settlement!&#10;&#10;In Trinidad players represent the heads of the Spanish families in Buenos Aires. The game is set in 1580 and covers the following 120 years, allowing the players to develop the city how they think is better. They can promote commerce with Spain, constructing a Harbor, and creating many productive buildings, or in another way, they can promote the construction of the biggest city buildings like the Cathedral, the Fort or the Cabildo. They can chase the richness, try to build an army or try to collaborate with the Church. They can link their policy to some famous city character, which will push a specific skill. But also this decision will not be easy! Some city representatives want to exploit all available resources and do a new war with Natives. Others push to collaborate with them, try to join forces and combat with the Corsairs. And you, what will you do?&#10;&#10;Trinidad is a strategy game based on player actions and worker placement 2.0 mechanic, where workers have multiple functions and can be used in several different ways. The game also includes several other mechanics like action card combinations, character management, trading, and diplomacy. The game comes full of great miniatures for the historical buildings, workers, conquistadores, and warriors.&#10;&#10;Trinidad is inspired by the 2010 board game Rio de la Plata.&#10; &#10; Designer's note:&#10;This game wants to celebrate the birth and development of a grand city, Buenos Aires. A very special city for me, as it&rsquo;s where I met my Paula.&#10;The adversities that characterized the birth of Buenos Aires were exceptional, so much so that it was founded twice. It is a fascinating story, almost unbelievable, which like all stories has some dark and light aspects. Buenos Aires, like hundreds of other cities in the world, was founded during the colonial expansion in the 16th century. It was a dark period in the history of humanity, especially in South America and this game in no way wants to celebrate it or endorse it.&#10;Trinidad is about construction, not destruction, and wants to intrigue it&rsquo;s players with it&rsquo;s strategy and growing complexity. &#10;&#10;I hope you will play it, have fun, and be passionate about it!&#10;&#10;