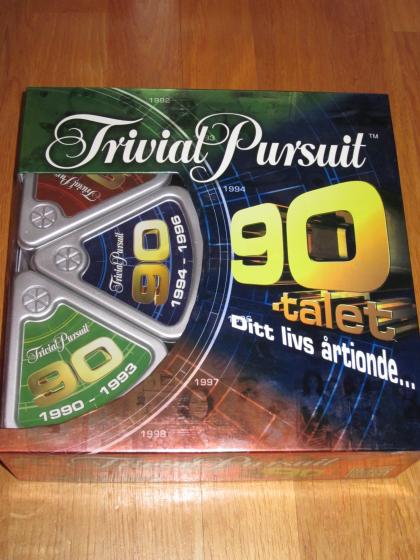 Trivial Pursuit 90-tallet is a Norwegian version of TP with new categories and questions from the 1990's.

The categories include:
-The Global village - Weird and wonderful facts and news from the entire world
Example: What does the acronym OPEC stand for?
-The A-team - anything and everything from the gossiprags in the 90's
Example: In 1992 the actor who played the leading rol in Hitchcocks Psycho died. What was his name?
-Top storeis - World events
Example: Who preceded Jacques Chirac as the president of France?
-Shopping therapy - Fshion and trends
Example: What is the color of Cubus' logo?
-Sound and image - movies, TV and music
Example: Who portrays an american neo-nazi-skinhead in American History X?
-Winners and losers - Sporting events
Example: Who was the goal keeper for France during the 1998 World Cup in football?