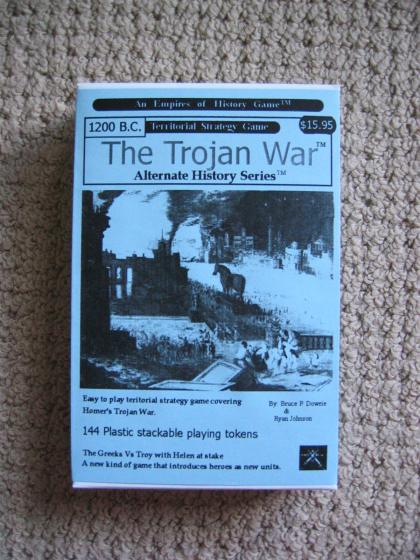 The Trojan War board game is a recreation of that epic struggle between the mighty trade city of Troy and the alliance of Greek city states. In this unusual game the mighty Greek army must establish itself near the city of Troy and lay siege. Storming the mighty walls of Troy being a virtual impossibility, the siege of Troy shifts the war to a conflict over food. Can the Greeks starve out the Trojans? Can the Greeks themselves pillage enough food from the surrounding villages and towns to keep their own massive army fed? Can the allies of Troy relieve the besieged city and rush much needed supplies into the city before getting slaughtered by the Greeks surrounding the city. Can the Trojans strike a bold attack against the Greek main camp and break the siege completely? Will the Trojans dare use the Trojan Horse gambit?

Representing all of the heroes from this desperate war, with special rules for Hero units. Achilles, Hector, Ajax, Paris, Memnon and all the rest...

Striking a careful balance between homage to Homer's epic and known historical data of the period, the Trojan War presents a very realistic look at what the real world war between the Ionian Trojans and Mycenaean Greeks might have been like.

Affordable at a suggested retail of $15.95