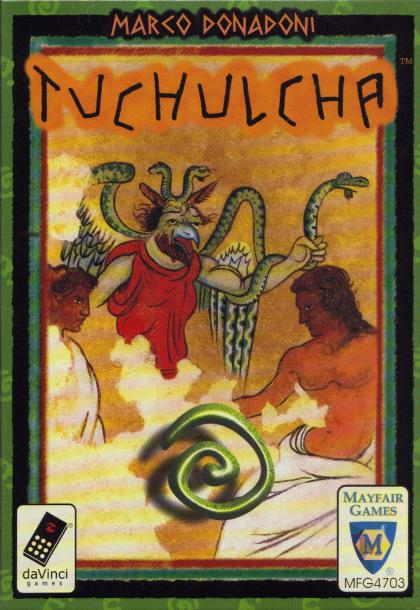 Game is themed around a purification ritual of the ancient Etruscan people, who predated the Roman Empire around 6th century B.C. Each player represents a different temple, faithful to the divinities Achvizr, Alpan, Leinth, and Thalna. On "Tagete's" day, the Etruscan Haruspexes [priests] proceed down the path of purification to the Velthumena Altar.

Each player has 8 pawns representing "Haruspexes" [priests] in their color. Each player is trying to move their priests along the path of purifiction from their home temple to the altar at the center of the board. One player may also choose the path of darkness and consecrate themselves to the divinity "Tuchulcha" with the goal of elminating all rival priests. This role is only available in 3 and 4 player games. If a player chooses this path, then another single player may consecrate themselves to "Lasa Vecuvia" with a different set of powers. This player's goal is to now move their priests to set "passages" on the path and place 4 seals to win the game. This role is only available in 4 player games.

Players win by having the most priests in the center altar at game end. If a player chooses Tuchulcha's power, they win by eliminating all other priests, and lose if any priest enters the altar. A player that chooses the Lasa Vecuvia power wins only by placing all 4 seals.

Game plays with 2, 3, or 4 players. Each player begins the game with 8 pawns on their home temple. On their turn players roll 2 dice. If doubles are rolled, the player may throw a third die. Then player chooses to move one or more of their pawns the number of pips shown on each die. For example, if a 5 and a 2 are rolled, a player may move one pawn 5 and another 2, or one pawn 5, and then 2 [not seven at once]. This is important as where you land can be significant on each move. Players move their pawns around a spiral path approaching the altar at the center. Along the way players will encounter other players' pawns, and special spaces on the path. These spaces can increase the "spiritual strength" of players' pieces by two times of three times [Mystical Stones], or "passage" spaces can banish them to the Tuchulcha forest. While Mystical Stone spaces are powerful in defense, pawns must move off these spaces as soon as they can. Pawns can normally pass through each other regardless of owner. Any number of a single player's pawns may occupy a single space. However, when a pawn would land on another player's by exact count, it must equal the "spiritual strength" of the player's pieces in the space. Normally, spiritual strenght is one per pawn, but in the 2x or 3x spaces these are multiplied respectively. If a moving player can eqaul the spiritual strength of pawns in the space, then the occupying pawns are banished to the Tuchulcha forest. These pawns are essentially out of the game, but can be used to activate the alternate "Tuchulcha" player role. Once a pawn banishes an opponent's pawn, it may not move again this turn. 2 player game uses 2 "neutral" colors which any player can move during their turn. 3 player game adds the optional Tuchulcha player role, and 4 player adds both Tuchulcha and Lasa Vecuvia roles to play.

At any time one and only one player [in 3 and 4 player games], may choose to take on the role of Tuchulcha [a god of destruction]. To activate this power, the player must "sacrifice" 3 pawns. These pawns may come from the home temple, altar, path, or Tuchulcha forest. Once activated, the Tuchulcha player's new objective is to eliminate all other players' pawns. As soon as one other player's pawn enters the altar, Tuchulcha loses and is eliminated from the game. This can make this role selection a risky move. However, this player gains powerful new abilities. Tuchulcha's pawns can never be banished to the forest, he rolls 4 dice and selects the 3 best, and no longer has to stop after banishing an opponent's pawn.

If a player chooses to be Tuchulcha in a 4 player game, then another [and only one] player may take the role of Lasa Vecuvia. This player must still have 4 active pawns in play to activate. This player's objectives are now to "seal" the 4 passages along the path. These passages normally banish pawns to the forest, but when the Lasa player lands a pawn on the passage, she places a seal token on the passage and removes the pawn from play. Once she places all four seals in this manner she wins the game.