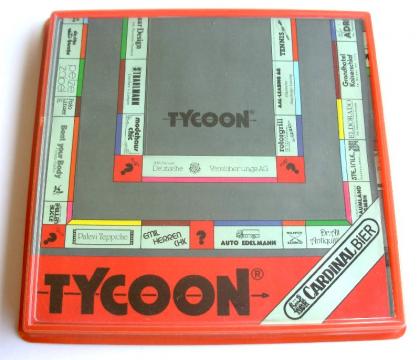 Tycoon is published by Tycoon Company in Asbach-Bäumenheim, Germany.
The game is reminiscent of Monopoly - you buy properties and collect rents from other players - but opposite to Monopoly, there are no houses nor hotels to build.

There are 40-44 properties on the board, which belong to one of 7 groups (5-9 properties per group). The value of a single property increases, when you have more than one of the same group, but this is not so easy, because the single group members are well spread over the whole board.

The game ends after a fixed amount of time, which must be defined before the start.

Similar to "Your Hometown Tycoon Game", several editions exist, each of them depicting shops and stores from a specific city or region in Germany or Switzerland.