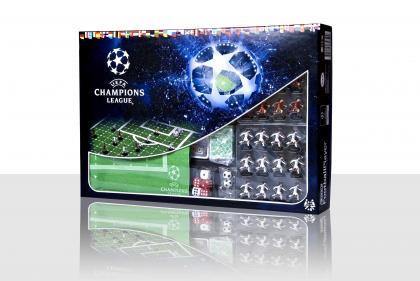 from the publisher:
Lights turn on over the most famous soccer stadium in the world. Inside the box you will find the two teams reaching the Champions League Final in the last year. TABLE UEFA is one of the few board-games on soccer able to well represent the real atmosphere of a soccer match! Players can move on the field passing the ball, shooting, creating pressure, fouls and even being expelled. The match is really fast-paced, realistic, and as a coach you can decide the final result by using the best tactics. TABLE UEFA CHAMPIONS LEAGUE IS A GAME FOR FAMILIES BUT IT'S SO realistic that its simulation level will also capture the imagination of gamers.

The game is played taking turns: each turn the team owning the ball rolls a red 6 sided die and consequently moves a miniature on the field. The defending team concludes the turn with an alternative movement of 2 squares in order to mark the attacking miniatures. Each attacking miniature is marked when it has from 1 to 6 opponents in the next squares and its movements are always diminished by the same number as the opponents that mark him. The defender can then try to steal possession. Short passes are possible within 4 squares from the ball possessor and long passes and shots at goal are performed by rolling 2 white 6-sided dice. For saving shots, the goalkeeper will roll the same dice and compare the results. Special cards add tactical possibilities to any match development. The game is easy to learn and the marking rules with the alternative moves make it very similar to a soccer match: therefore any familiar playing styles are applicable.