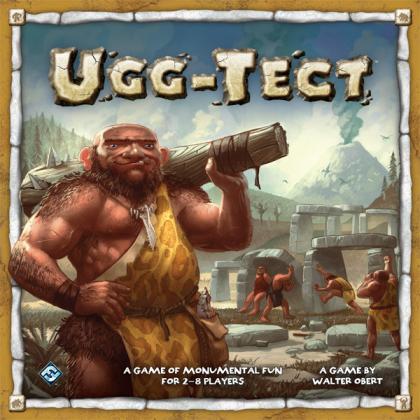 In Ugg-Tect, first released as Aargh!Tect, players work in teams to construct fabulous – well, let's say "functional" – structures out of materials lying around them. All the players are cavemen, however, so you have only rough blocks with which to build and you can communicate only through primitive gestures and sounds. Ugungu!

When you're the architect on your team, you see a building plan that shows how the blocks should be placed in the finished design. To get the builders on your team to do the heavy work, you must tell them which piece to use – through gestures like stomping your feet or raising your arms above your head – and what to do with it. "Manungu" tells them to put the piece at the front of the structure, while "Manungu manungu" means to put it at the back. Moving pieces left or right, up or down, laying them down or rotating them – lots of details need to be conveyed with only a few commands and your trusty (inflatable) spiked club. When you give a command and your team performs well, tap them on the head once to show approval. Hit them twice, though, and they know they messed up and need to pay better attention. I said, "Karungu!!" (stomp stomp stomp)

The fastest – and most accurate – architect/building team will carry the day...