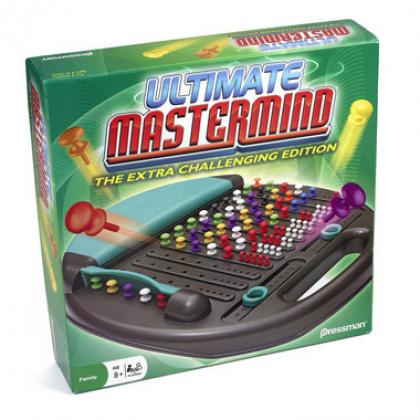 Ultimate Mastermind has an extra code peg which brings it to another dimension. The code-maker selects arranges any 5 pegs in the compartment right in front of him or her, which is hidden from the code breaker. The code-breaker then has to make guesses as to what the code is by filling in rows of 5 pegs using the feedback from the code-maker (correct color/correct position, correct color/incorrect position, or nothing). There are ten chances to break the code. If the code-breaker cracks the code in 6 tries, that is how many points are given to the code-maker. Players alternate as code-maker and code-breaker for as many rounds as they would like to play. The player with the lowest point total after the predetermined number of rounds are played, is the winner.

This is a more advanced version of the original Mastermind game. This version includes 5 holes (versus 4 in the original).