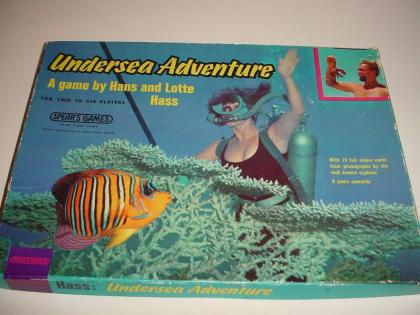 "The deep sea is full of secrets and rich in shapes and colors. This game will give a glimpse of the adventurous world underwater" - Hans Hass. Hass was a scuba-diving pioneer, and with his beautiful wife Lotte was well-known in the 1950s for his underwater photography and film-making.

Each player is a diver competing to bring to the surface the greatest number and value of sea creatures (and some treasure!). The deeper the dive, the greater the rewards, but also the greater the risk of losing the catch from unwelcome events or robbery by another player. Returning to their ship makes the diver's catch safe, but takes time, and the next dive may be limited to shallower waters where there is less to find.

The catch is represented by cards of differing values, with bonuses if sets are collected, including some dangerous creatures scoring negative points. Most show an interesting underwater photo. There are also Action (event) cards and Diving Equipment cards, that determine how deep each dive can go.

The board has a disc underneath, and when this is rotated different colors show through holes punched in the top board. Each turn the player takes the action determined by the color at the current location of their diver pawn - take a number of value cards, an event card or a "dangerous" card - and then hopes to move somewhere else to collect more value cards. The disc is rotated each time cards are taken, and the holes are far enough apart that the change of color is unpredictable. There is a die, but its main use is to determine the outcome of robberies.