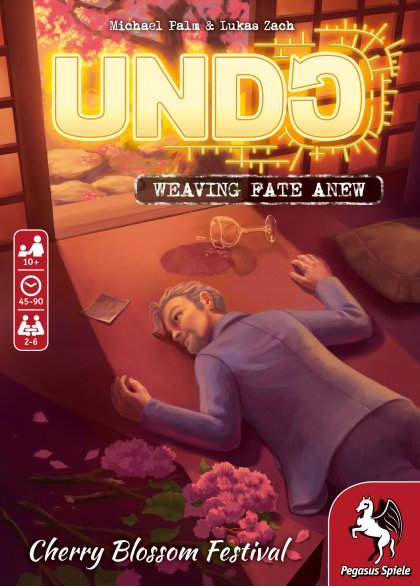 Time heals all wounds, they say, but the sudden death of a loved one sometimes shakes those who are left behind so much that their faith wavers. To prevent this, the gods send fate weavers to change the past and prevent death. In the game series UNDO, players slip into the role of these destiny weavers and do everything in their power to undo sudden deaths &mdash; whether murder or suicide. Not only do they travel minutes or hours back in time, but sometimes thousands of years to change events that have laid the foundation for the later stroke of fate. Sometimes a leap into the future can also provide important information.&#10;&#10;The UNDO series combines the theme of time travel with emotional, extraordinary stories that players must assemble piece by piece. Each time jump gives them another choice in how they can change the past &mdash; and not every change is a turn for the better!&#10;&#10;UNDO: Cherry Blossom Festival, one of the first three UNDO titles, is set in Okayama, Japan in March 2000. A man in his sixties lies lifelessly on the floor of his living room, a broken wine glass and the photo of a young woman in a wheelchair next to him. The deceased wears an old-fashioned blue suit and has no visible injuries aside from a barely perceptible scar above the eye. In his jacket a telephone rings with the melody of &quot;Moonlight Sonata&quot; and on the table lie cherry blossom branches...&#10;&#10;This title isn't about solving a crime or catching a murderer. Instead, players must embrace their role as disembodied destiny weavers to go through the past of this man's travel to prevent his death. Everyone who leaps through time carries a momentous decision that in the end will determine whether he lives or dies?&#10;&#10;