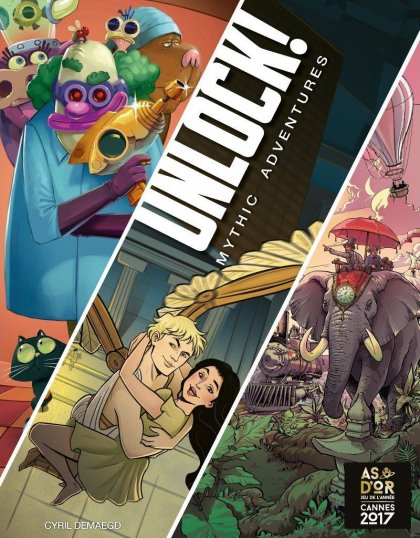 Unlock! is a series of escape adventures for up to six players. With one hour on the clock, players work through a deck of sixty cards as a team, searching for clues, combining objects, and solving puzzles. The free Unlock! companion app runs the timer while also providing clues, offering hints, and confirming successes. Once the team has reached a solution and entered the correct code into the app, they will escape and win the game!&#10;&#10;Unlock!: Mythic Adventures contains three scenarios revolving around these themes (not the official name of the scenarios):&#10;&#10;&#10; Around the World in 80 Minutes&#10; In the Clutches of Hades&#10; Professor Noside's Animal-O-Matic&#10;&#10;&#10;&mdash;description from the publisher&#10;&#10;