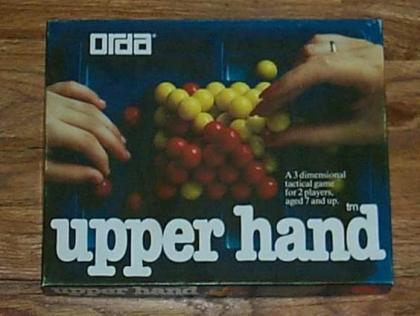 This is a simple but challenging game. It is very simple to learn but the strategy can be very deep. The board consists of a 5x5 grid of dimples in which marbles are placed. The game is played somewhat differently than Pylos or Pyraos which form a pyramid on a 4x4 grid.

The "wild" third colored marble is placed first in the center of the 5x5 grid. This overcomes the problem that the pyramid on a 5x5 base requires an odd number of marbles to build.

In Pyramids the goal is to get rid of all of your playing pieces first. If placing a marble completes a square and at least three of the marbles in that square are the player’s color, then the player gets to place an additional marble on top of the square. If the additional marble completes another square, then using the same rule as before the player gets to place a third marble on so on.

Since the two players may have overall played a different number of marbles towards the end of the game, the game might be over before the pyramid is finished. The game obviously can’t last longer than 27 moves since there is no rule to remove marbles in Pyramids.