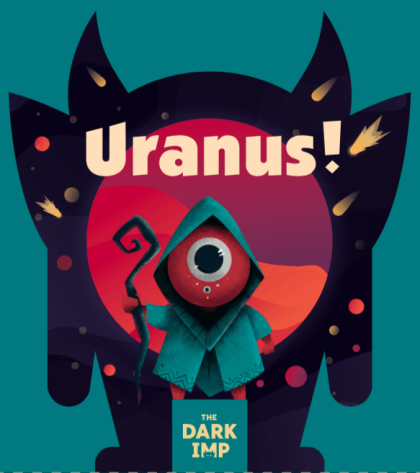 You are the ruler of one of six alien races, each with their own special powers, which inhabit the lesser-known moons of Uranus. Until recently, your people have been living peacefully in underground dwellings to protect themselves from the noxious gases on the surface. But now you are besieged by violent and increasingly frequent asteroid attacks, which are causing irreparable damage and threatening your very existence.&#10;&#10;Working together with the other rulers, you must rally the troops to build infrastructure and develop technologies that will protect you from the asteroids and will ultimately allow you to escape. Use your race&rsquo;s special powers to help you and your neighbouring moons, which are suffering the same fate, to settle on Uranus before your moons explode.&#10;&#10;This is a co-operative game: players work together to try to beat the game. Players win the game if they manage to get all of the moon races housed in completed modules on Uranus before the moons explode. No race must be left behind.&#10;&#10;Each round has four phases that must be completed in order. Players play simultaneously within each phase, but wait until all players have finished a phase before moving on together to the next.&#10;&#10;Phase 1: Asteroid track. If the asteroid track marker lands on an asteroid attack, the next attack is carried out. Areas of moons are damaged and 'go dark' making these sections unusable.&#10;&#10;Phase 2: Mine and transport. Each mine on a player's moon produces a moon rock of the appropriate colour. The rocks are then transported along tunnel and grouped together in connected networks.&#10;&#10;Phase 3: Use and remove. Groups of moon rocks are used together towards a single project. Progress is marked on the project board. Players may get ready to build tunnels and mines, construct launchpads and fortifications, load up their space gun or work towards developing different technologies. Each technology helps the players to progress in the game.&#10;&#10;Phase 4: Build and activate. Completed projects can now be constructed on your moon. Mines may be built or fortified. Tunnels constructed or removed. Networks will change as your need for different groupings of resources changes.&#10;&#10;When all players have discovered spaceship technology and habitation modules are constructed on Uranus, players may travel to Uranus. This is a race against time.&#10;&#10;&mdash;description from the publisher&#10;&#10;