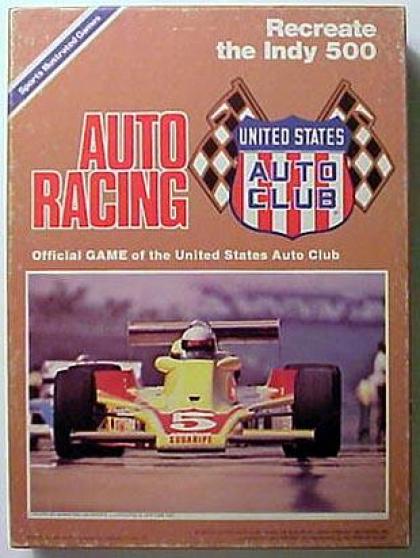 Billed as the Official Game of the United States Auto Club this is one of Avalon Hill's early Sports Illustrated branded games. The game was created by jim Barnes who sold the game at a booth that he set up at Indy and other race track promenades in the 1970s. Mr. Barnes struck a deal with Avalon Hill and the game was changed a little by the development team at AH and published with the SI logo on the box. On an oval track you can run up to 33 cars. Each car has its own driver card derived from the performance of the actual drivers of the featured Indy race. Ongais, Foyt, Unser, Sneva, Mears, Rutherford etc, every driver that was in the that year's Indy has a card with a color foto on one side and game racing charts on the other side. One Card set for an even year Indy race, 1978 thru 1986, was included in the box and the newest card set was also available thru the AH mail order program.

Each driver card has 6 tables on the back. Three of the tables for movement, you chose whether you are going to drive normally, charge or back off and then roll 2 dice, referencing the appropriate table. The result will tell you how far you can move or if you have encountered car trouble. There are 2 trouble tables that can slow you down or knock you out of the race. There is also a pit stop table which controls how many turns you must sit in the pits before re-entering the race.

The game is driven on Stats and can be played solitaire.