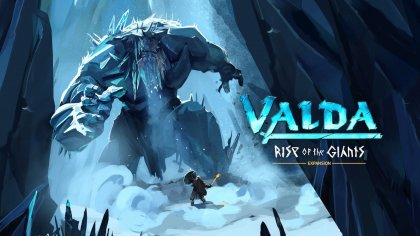 Valda: Rise of the Giants

SUMMARY&#10;Valda: Rise of the Giants is a an expansion to Valda. As in the base game, it is a power-building strategy game where you as a viking warchief use divine powers, manage a village and resources, play powerful spells and build temples. You gather followers, fight off enemies and climb the steps to divinity.&#10;&#10;This expansion gives you the chance to discover the power of the Giants. 15 new cards for the base deck and 68 new Giant cards that offer you brand new powers with never before-seen graphics. A new powerful resource, 7 Giant powers, double sided action tokens and 5 new player boards complete this expansion.&#10;&#10;STORY&#10;All was peace and quiet in Asgard. The Gods continued being worshipped and led their easy immortal life. Until Hel, Queen of the Underworld wanted to broaden her empire. She seduces Surtur to form a powerful alliance. Thirsty for destruction Surtur calls his fellow brethren to reclaim their territory. After decades of hiding the Giants rise again. War is among us.&#10;&#10;HOW TO PLAY (AND WIN)&#10;In Valda: the Rise of the Giants, you now have a choice between Gods and Giants and their powers to use to your advantage. &#10;Now every player finishes 4 phases during their turn. The player starts with the Valda phase where he/she scavenge and explore the newly formed world by drafting and playing cards and actions. Building temples in the different God or Giant domains is an important way to gain divine abilities, and get access to more powerful spells. The attack phase is played similar to the base game. So every player can attack the player in turn once. In the follower phase you worship a God or Giant by building a temple in the specific God or Giant area. Resources (divine blood, gold, diamonds, runes), cards or (dice) eyes can be transferred into followers. In the last phase you roll dice to harvest rare resources for your tribe.&#10;&#10;The viking chieftan who has the most followers when the ship arrives in Asgard, is worthy enough to climb the world tree Yggdrasil and becomes a God! Oh.. and he/she also wins the game.&#10;&#10;&mdash;description from the publisher&#10;&#10;