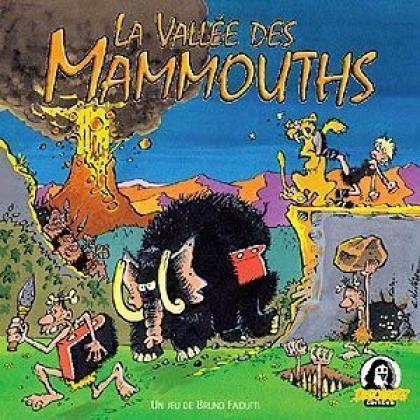 Valley of the Mammoths

While fleeing from starving wolves and wild sabretooth tigers, will your tribe of cavemen manage to survive in, let alone conquer, the merciless Valley of the Mammoths? Will it escape the stampeding woolly rhinoceroses and the massive mammoths, only to be reduced to paté under the heavy clubs of their rival tribes? In these chaotic times, man must fight for everything, his adversaries are without pity, and nature herself is in a state of violent upheaval.
In Valley of the Mammoths, you must contend not only with rival tribes (the other players) but also with wild, untamed, unpredictable nature. To feed themselves, your tribe will have to devote themselves to hunting, gathering and fishing. They may even attempt to innovate by developing agriculture... But all is not peaceful in the Valley, opposing tribes will attempt to hunt YOUR bison & mammoths, to gather YOUR fruits & roots, to fish YOUR rivers & lakes... and to even steal YOUR WOMEN! You will have to fight them off, and protect your food supply... all the while keeping a watchful eye on the smoldering volcanoes - after all, one never knows.

Originally published only by Ludodelire in French. Re-published in both French and English with some updates 2001 by Descartes.

Voti e commenti per Valley of the Mammoths