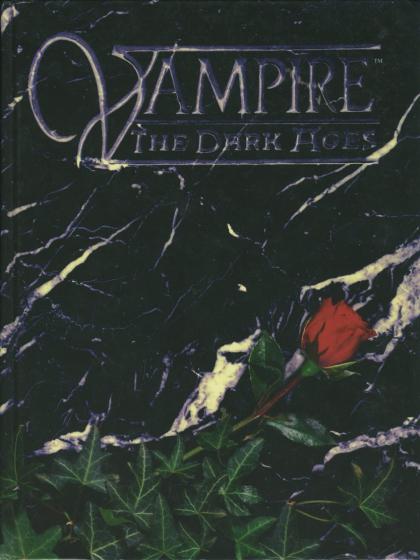 This is the core book for Vampire: The Dark Ages. This game is derived from Vampire: The Masquerade, and unlike other games set in the World of Darkness, it does not take place in the modern age, but in medieval times.

In this game, players play vampires (the Cainites). They are fighting their private wars for power, while trying not to lose themselves to the Beast.

During the Dark Ages, the vampires are still less careful than they are in later times. And often, they don't need to be. Humans are far less organised; things that happen in an isolated cottage are less likely to attract attention than something happening in a 20th century apartment building. There are no foes with high-tech weapons.

On the other hand, there is much to fear as well. There are few places to hide from the sun. Civilisation has not gained that much ground from the wilderniss, and the werewolves abound in that wilderniss. Also, little is happening at night. There are few shops to supply the vampires, and the Cainites' nightly activities are much more likely to draw unwanted attention.

This book mainly deals with the different characters a player can create. A characters abilities are mostly governed by his clan, which is the same as the clan of the vampire who sired him. For the embrace, the creation of a new vampire, a vampire will usually select a person that will fit his clan.

Another important aspect is the Road the character will follow: the mortal code he followes that keeps him from giving in to the Beast and becoming a mindless monster.