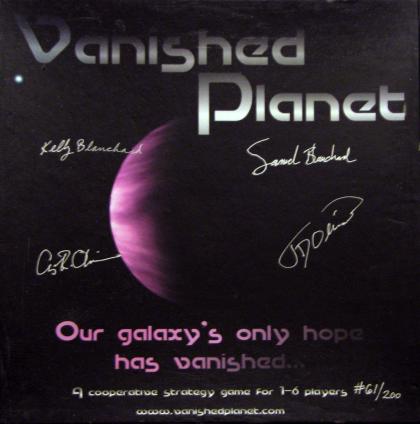 In short, Vanished Planet is a cooperative game with some similarities to Starfarers of Catan. From the publisher's web page:

Vanished Planet is a cooperative board game. That means that all players work together to play the game, and either win as a group or lose as a group. It can be played with as many as six players or as few as one.

The difficulty level is scalable, making it enjoyable for everyone from the beginner to the expert. Vanished Planet can be made easy enough for parents to play with their children or difficult enough to challenge the most masochistic hardcore gamers.

The past one hundred years had been marked by an unprecedented peace. Humans from the Earth, newcomers to the Galactic Sextant, surprised the Elder Races with their grasp of foreign technologies and their dedication to freedom and peace. With Earth's help, a massive communications and trade network was established. Treaties were negotiated. Disputes were settled and wars became less frequent. The Peoples of the Sextant welcomed the children of Earth and looked toward a brighter future.

Then, without warning, Earth vanished.

In its place appeared a writhing mass of darkness. It was impenetrable. It was unassailable. It was without reason. It drank energy like water and consumed all matter it touched. After devouring Earth's solar system, the Creature began stretching massive tentacles across space with terrifying speed, reaching straight toward the homeworlds of the Six Peoples.

With Earth gone, the communications network all but broke down. Each of the Peoples accused the others of betraying Earth and setting loose the Creature, for each had lost many of their top men and women with the planet when it disappeared. And with them vanished all hope of stopping the dark Creature. In their despair, colonies revolted, workers ran from their jobs and soldiers abandoned their posts in an attempt to flee the approaching darkness.

It was days before any news came to them. Even the hub satellites that formed the backbone of the network spun silently in empty space. News came in the unexpected form of a single ship; one of the few to survive the cataclysm and return to tell what they had seen. Unlike the other ships, they brought not rumor, but six of those thought lost in the vanishing and their tale was devoid of the speculations the other ships had brought.

The ship, Hope, raced from home world to home world bringing what truth they knew of Earth's disappearance to their peoples, narrowly avoiding the wars that were preparing to burst forth over the galaxy even as the Creature began groping insatiable tentacles toward them over the vastness of space.
Then the messages came. As one, the hub satellites flickered into life; suddenly and strangely, for the words were not sent by the peoples to one another, but to all six peoples from the the vanished planet Earth!

Bizarre blueprints for wondrous new technologies were transmitted and strange instructions were given, both for the banishment of the Creature and the formation of a new system for Earth to use when it returned. Time was of the essence. Earth could do nothing and the Creature would soon devour the other worlds if they did not hurry...