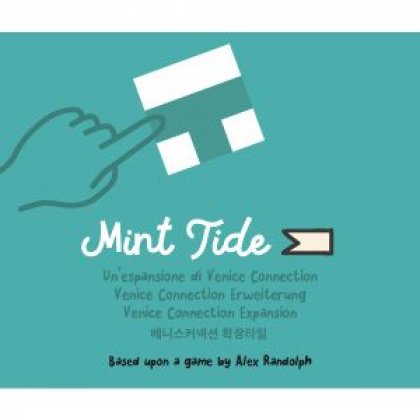 Venice Connection: Mint Tide introduces &quot;T&quot; canals in Venice!&#10;&#10;While playing Venice Connection, you start with these four &quot;T&quot; canal tiles separate from the sixteen original tiles. These twenty tiles form the reserve; two of the &quot;T&quot; tiles have an I-shaped canal on the reverse side, while the other two feature an L-shaped canal.&#10;&#10;The rules for tile placement remain the same as in the original game. On a turn, a player takes 1-3 tiles from the reserve, places them in a straight line with canals intersecting only canals and buildings adjacent only to other buildings, then places this line of tiles adjacent to at least one tile already in play (again, with canals not intersecting buildings. A player can use a &quot;T&quot; tile to add a branch to the canal, or they can use the reverse side for the &quot;I&quot; or &quot;L&quot; shape.&#10;&#10;The rules for victory remain the same. If you make a tile placement that &quot;closes the loop&quot; &mdash; that is, so that every canal is connected to another canal &mdash; you win the game. If you think that the opponent's previous move makes it impossible to close the loop, you can say &quot;Impossible!&quot; If it is indeed impossible to close the loop, you win the game; if the opponent demonstrates how they can close the loop with the tiles that remain in the reserve, then they win.&#10;&#10;